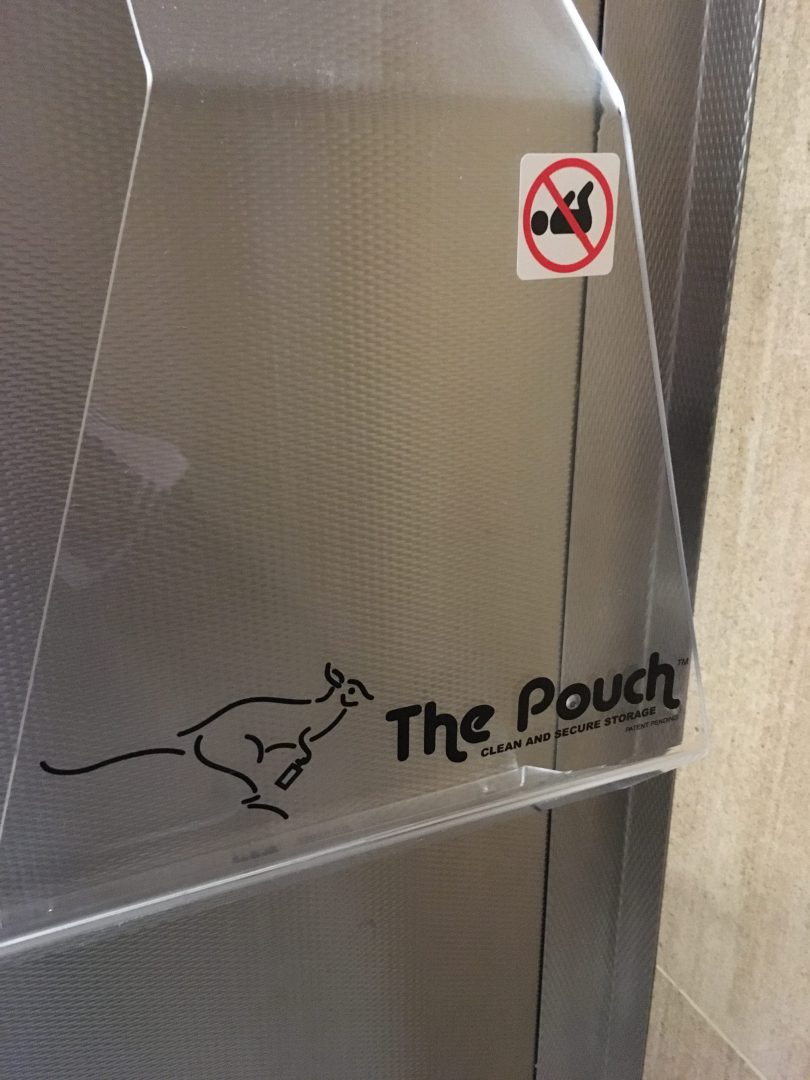 It’s been said that common sense isn’t all that common. I was recently reminded of this in a disturbing way.

The people who run Tampa International Airport have installed an innovative device in their bathrooms. It’s called The Pouch. I could immediately see its usefulness. Putting a backpack, briefcase, or other small carryon in this device will keep it clean and dry.

I noticed a sticker affixed to The Pouch. It pictured a baby with the universal “don’t do this” symbol on it. Seriously? People need to be told not to put a baby in there? Does this mean someone actually tried it? Yikes! While this an extreme example, it once again showed me that people don’t always make decisions rooted in common sense.

Common sense is often lacking in many areas of life and work. One is hiring. I frequently observe organizations engaging in hiring practices that defy common sense. Does this mean that the leaders who engage in the methods are bad people? Maybe even dumb? No. Of course not.

The issue is that habits often interfere with our innate instincts. The very instincts that are at the core of common sense decision-making. We get so used to doing something a certain way, we don’t see that there’s an alternative. Frequently, it takes someone pointing out that there’s a better way. Here are five of my most frequently shared common sense hiring ideas I’m sharing with leaders.

Recruit ahead instead of react to an open job

Change is inevitable, including that people will change jobs. Your best employees could leave today, tomorrow, or next week. No matter how loyal you believe them to be. Given the immediate, negative impacts of an open job, it no longer makes sense to wait until a job opens to fill it. In today fast-paced world, common sense dictates that you must line up talent before you need it.

Make hiring decisions based upon facts instead of feelings

Most people understand that feelings aren’t facts. Yet, they allow their gut feelings, such as liking someone, to dictate who they hire. Sure, liking a candidate is a good thing. But likeability isn’t proof that someone fits a job. Common sense selection requires having a list of clear criteria that help you pick the right people regardless of what your feelings are telling you.

Ask leaders if one resource, such as a job board or referrals, can be relied upon to fill every open job every single time. Most of these leaders will acknowledge it’s dangerous to put all of your eggs in that one basket. However, watch many of these same leaders in action, and you’ll observe contradictory behavior. They rely on that one resource to the exclusion of everything else. Here’s habit in action, trumping common sense. Filling jobs quickly with high-quality talent requires tapping into more than one talent stream.

Have candidates show instead of tell

Conventional job interviews are an inaccurate way of determining fit. Why? Both the jobseeker and hiring manager are putting their best selves forward. This gives each party a narrow view of reality. It should be no surprise that many hires fail, given that a decision was made based upon limited information. The common sense way to interview is to seek proof of fit. Having candidates show you they can do the job allows you to experience them in action, while they get to try on the job for size.

Change one thing at a time instead of everything at once

How many times have you tried to change many things all at once? I’m betting that didn’t turn out well. Fast change doesn’t stick. It takes time to adjust your routines and change your hiring habits. A rapid series of changes will overwhelm you. When your sense of being overwhelmed reaches a tipping point, you’ll give up and revert back to your previous routine. Better to change one thing at a time and have it stick, than rush the process and have to start all over again.

Access to your common sense is immediately available any time you need it. You just have to get out of your own way. The beauty is the inherent simplicity that comes with it. Common sense solutions are the easiest to employ, once you realize the only thing standing in their way is you.

Why did the man in business attire suddenly drop his pants in the middle of the “B” Concourse at Atlanta’s international airport? That’s a question many of us in the terminal were pondering yesterday. I decided not to stick around to see the outcome of his odd choice as there are some things I just don’t need to see. And this was one of them.

Most of us avoid engaging in this type of public display of awkward behavior since our common sense guides us in making choices. This same common sense should be our guiding light when selling, as well. For example:

Am I accusing sales organizations of lacking common sense? In some cases, yes. In others, it is merely a lack of application of this trait. What I’m suggesting is if you have it, use it when you sell. If you don’t…well, never mind. I highly doubt anyone lacking common sense kept reading when I brought up this issue at the start. Maybe they’re related to Mr. Dropped Drawers in Atlanta.

Watch how selling is typically done and what you see often defies common sense and logic. For example, in a conversation with a new sales manager on Wednesday, he informed me that he was told by the more tenured sales guys to share a success story when a prospect says they are working with other vendors. When I asked if that would convince him to change his mind if he were the buyer, he snorted and said in an incredulous tone, “Of course not.” “Then why would you do that,” I asked. To which, he replied, “Good question.”

A lack of common sense and faulty logic are frequently present in selling. No one really likes to be sold to, yet, salespeople still try their best to talk people into buying.

In Sales Yoga, we allow the better salesperson to sell and the better closer to close. Every time that’s the buyers since they always believe themselves.

In looking at how you sell, let logic and common sense prevail. Ask yourself, “Is this how I’d want to be treated if I were the buyer.” If the answer is “no,” behave in a manner that is congruent with the selling you would want to experience. That’s much better than subjecting someone to a sales approach that not even you want to receive.

Learn how to become a Sales Yogi.