There are no silver bullets to fill a job, but there is a silver lining when someone tells you “no.” Everyone in the hiring process hires is told “no” at one point or another. Hiring managers hear candidates reject rock-solid job offers. HR and staffing pros deal with managers who turn down well-qualified candidates. The silver lining in these situations is that you can ask people who say “no” a magic question that lets them talk themselves into a different perspective.

The magic question helps hiring managers see past their initial objections about a potentially good hire. This powerful query gives candidates the opportunity to consider shifting their point of view. The 3 words that comprise the magic question can even allow HR, talent acquisition, and staffing leaders to change their mind about adjustments to the hiring process.

If there are circumstances under which someone will change her mind, she knows what those circumstances are. By letting her do the talking, you’re giving her the chance to convince herself while also informing you of the details.

The magic within these 3 words is this: the person who just said “no” always believes her own point of view. She may not believe yours. Because of this, she is the most qualified person to overcome the reasons why she said “no” in the first place.

Candidate has unrealistic expectations
Brad fit the job but wanted $10,000 more than Ivan, the manager, could offer. Ivan asked Brad

Under what circumstances would you take this job for $10,000 less?

He then let Brad do the talking. Turns out there was a circumstance. One that Ivan couldn’t have anticipated. Brad had a three-week family trip scheduled. He said it would be worth taking 10k less if he could take that trip as planned.

Ivan went on to use this question over and over again with success. When a candidate said “no” because of a long commute the magic question let the candidate talk herself into a flex schedule. Then there was the highly talented individual who objected to some of the job responsibilities. Ivan’s use of the magic question allowed the candidate to talk himself into the fact that every job comes with a mix of desirable and undesirable tasks.

Now, every time a manager makes requests that cannot be fulfilled, they ask “Under what circumstances…” about that request.

Under what circumstances would you consider someone with less experience?

Under what circumstances would someone from a different college be okay?

Under what circumstances would you pay a bit more in salary?

Under what circumstances could someone without a degree do the job?

Time and time again, these managers would talk themselves into changing their own mind.

Staffing team is stuck in counterproductive habits
Just because you’ve always done something the same way doesn’t make it right. Cecilia, the new COO of a global staffing company, discovered that many of the challenges of the firm were rooted in ineffective business practices. Many of these business practices, including feature-benefit selling and most placeable candidate presentations, had been in place for years. Even though these practices weren’t working, her management team was convinced it was a bad idea to abandon these “best practices.”

Rather than managing by mandate (“change this because I said so”), she asked the management team the magic question.

Under what circumstances would it make sense for us to change these business practices?

Over the next 30 minutes, the managers told one another, instead of being told by the boss, all the reasons it would make sense to change long-treasured parts of their process. Within 60 days, the ideas from this meeting had replaced the ineffective business practices.

HR or talent acquisition team is stuck in counterproductive habits
“Behavioral interviewing has made our hiring better,” said Gilbert, the VP of HR for a manufacturing company. When pressed for details, Gilbert couldn’t provide them. His department had never measured the impact of behavioral interviews. He believed in this style of interviewing. This and this alone was enough proof.

What happened next? The magic question (no surprise).

Under what circumstances would it make sense to change how your company interviews?

Gilbert responded, “Proof. I’d want to see proof there was something better.”

Talk is cheap when we’re the ones doing the talking. When we allow others to convince themselves, their words are priceless. Everything they say, they believe. Next time you want a job candidate, hiring manager, staffing pro, or HR exec to change their mind, let the most credible person do the talking That’s them, not you.

Scott WintripThe Magic Question: How to Use 3 Powerful Words to Get Anyone Involved in Hiring to Change Their Mind09.17.2018
read more Success in the staffing and recruitment business hinges on leadership. Yet, building and maintaining a strong leadership team is a constant challenge for many firms. In this conversation with Lisa Maxwell of Gerard Stewart, you’ll hear concrete advice and actionable steps that will strengthen your executive leadership team and also boost the quality of your entire firm’s management.

Every leader has to drive some type of change from time to time. Because changing things makes people uncomfortable, it’s common that leaders are viewed negatively, even when whatever is being changed is in the best interest of everyone. In this podcast, I walk you through three simple change management steps. By following these, you’ll no longer be seen as an “a-hole” and instead be viewed as an A-player by the very people impacted by change.

Scott WintripLeading Change: How to Go from Being an A-hole to an A-Player08.10.2017
read more

We live in an on-demand world. Every day, we access more and more products and services at the click of a mouse, touch of a button, or by dialing our phones. Many companies have installed apps, websites, and other devices allowing their employees to order food, report updates, and procure supplies the moment they are needed. This same convenient access must be applied to acquiring talent.

“Downloading” the next hire should not be a reactive process where people access resumes to begin a search. Every company can increase the flow of candidates. When a more substantial pool of talent is combined with better selection, interviewing, and quality checks, companies can build a Talent Inventory, people that are ready to go the moment they are needed.

Quick and decisive hiring (filling roles with greater speed, more accuracy, and less effort) should be a non-negotiable standard for leaders to keep their jobs.

Take a moment and see things through the eyes of a child, especially during this holiday season. Anticipation and excitement fill her entire being as she thinks about all of the possibilities that the day will hold. Even when family members become impatient with her or one another, she still sees the glass half full, believing that wishes do come true.

Where does this attitude go when you become an adult? It gets buried under responsibilities, distractions, and the stresses of life. But it’s still in there. All you have to do is take a moment and really look at the world around you to find even the smallest thing for which you are grateful…and then another…and then another. Before you know it, you’ve harnessed that child-like ability of eternal hope that is always there, ready to be accessed.

After the holidays, you can continue seeing things as fresh, new, exciting, and hopeful. You can find the possibilities, even in the problems. When work is overwhelming, you can still choose to be grateful to have work and use every opportunity, positive or negative, as another chance to see the world through child’s eyes. Your attitude is yours and the choice is yours about what that attitude will turn into, regardless of the circumstances around you.

It is with an attitude of immense gratitude that I thank you for reading this blog. I’m grateful for the chance to be of service to you and those that you share this with. Happy New Year! May the coming year be your best one ever.

Scott WintripYour Attitude Is Your Own Darn Fault12.30.2013
read more 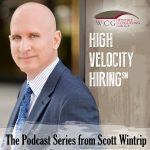 This 4-M saying will help you improve accountability within your sales organization.

Just as in your personal life, communication is key in business. Learn how you can build strong, meaningful relationships with your co-workers and clients.

One change can affect many different aspects of your business. Learn when the best time is to implement these changes.

My black lab, Kingsley, is like many of his breed in that he has Squirrel Moments. He’ll be doing one thing, and then a squirrel runs across the top of the fence. Seeing this out of the corner of his eye, Kingsley runs for all he is worth, convinced that this he’ll actually catch the critter. But, alas, the squirrel is always faster and craftier, and Kingsley is left to glare and bark his fiercest of barks. Once the squirrel is out of sight, Kingsley rarely returns to what he was doing before, no matter how interesting it may have been. The distraction, the Squirrel Moment, disrupted his memory and momentum.

While humans are much, much smarter than my goofy, yet lovable lab, we too have our Squirrel Moments. Even when we’re engaged in the most important of projects or tasks, something else, our “squirrels,” grabs our attention. It could be a call that would have been better to have let go to voicemail, the co-worker whose interruption could have waited, or that email chime or alert that ends up being a message that was much less important than the task at hand. Once we lose focus, we lose momentum. Work takes longer, and quality often suffers.

Multitasking is a myth, as we are incapable of effectively doing more than one thing at a time. Some may dismiss this, but take a moment to observe someone who claims to be multitasking. Watch long enough, and you’ll see that the individual may move from one thing to another every few seconds, but at no point in time is he or she really effectively doing multiple things at once.

The solution for Squirrel Moments simply requires better habits, including:

Squirrels are referred to as pests for a reason. Sure they’re cute, but they can be awfully destructive, burrowing into places where they cause distraction and even harm. Better that we leave the squirrels to the Kingsley’s of the world so we can stay focused on the real work that brings home his dinner.

Negative self-talk leads to low competency confidence. Don’t get caught in this trap!